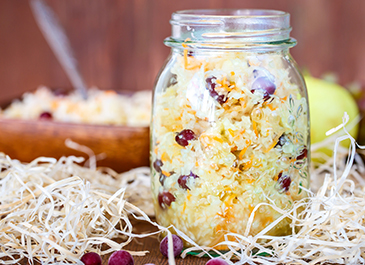 Fermentation is as old as time itself; long before we learned how to harness the power of yeasts and bacteria in food preparation, these critters were turning sugars into alcohol, organic acids and gases. Fermented foods exist across almost every culture and cuisine: in North America fermentation brings us beer, yogurt, bread and cheese; Koreans enjoy kimchi, a spicy vegetable staple; fermented cabbage or sauerkraut hails from Germany; Japanese culture has a fermented soup called miso; kombucha, a fermented tea with medicinal benefits, hails from Siberia; and in Indonesia, people enjoy tempeh, a fermented soybean cake. As we look towards traditional cuisines in hopes of reducing the impact of processed foods in our diets, fermented foods are enjoying a resurgence. Fermentation is not just a method of preserving food; the fermentation process itself confers its own unique health benefits.

Fermentation occurs when bacteria or yeast turn the naturally occurring sugars in food into acids or alcohol. Lacto-fermentation is the process by which most vegetables are fermented; it takes advantage of lactobacilli in the environment, producing lactic acid, which kills dangerous bacteria and creates a mildly sour product. Fermentation is carried out at ambient temperatures and the addition of salt helps discourage growth of harmful bacteria while the lactic acid accumulates in the food.

The Benefits of Bugs

Fermentation creates a product rich in probiotic cultures—known to help reduce inflammation in the gut, improve regularity and generally aid digestion and elimination. Turning milk into yogurt or cheese reduces the amount of lactose in the food, making it more digestible to those with lactose intolerance. Fermentation also breaks down phytates in foods, which make minerals more available in fermented soy foods and green veggie pickles. Fermented foods also contain increased B vitamins and organic acids due to bacterial metabolism, which some believe assist with the body’s natural detoxification processes. Despite these health benefits, it is important to note that raw, unpasteurized, fermented foods are not for everyone: those with a compromised immune system are best to stick with store-bought.

Unlike canning, do-it-yourself lacto-fermentation is generally considered safe because lactic acid is one of the most powerful inhibitors of harmful bacteria known to man. That said, if you don’t have a grandparent or parent to show you the way, taking a class or two can really boost your success rate. Fermentation is not an exact science: incorrect technique and attention can leave you with a counter full of rotting food. Look to Vancouver locations such as Urban Ashram and Radha Yoga and Eatery that both hold occasional fermentation classes. Also visit www.wildfermentation.com for a host of resources from a selfdescribed “fermentation fetishist.” Not ready to try it at home? Look for traditionally fermented sauerkrauts, yogurts and kefir with live probiotic cultures and experiment with kimchi, miso and tempeh, all of which can be found at both Asian and Western supermarkets.

Hungry for knowledge? Email nutrition@choicesmarkets.com or get nutrition tips on Twitter by following @ChoicesMarkets.