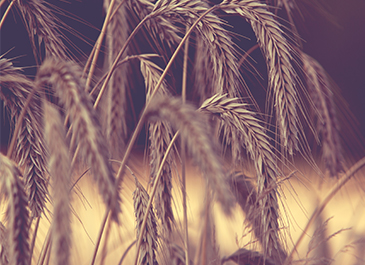 You may think red fife, purple barley and black einkorn sound like ancient Irish folk groups but, in fact, they are a different sort of ancient altogether. They are heritage or heirloom grains that have a long history here in Canada and are breeding interest for their numerous sustainability, health and taste benefits.
Large-scale industrial farming has affected us in not only a social and environmental context but also a health context. Specifically where grains are concerned, we’ve focused our diets on single-varietal hybridized crops chosen predominantly for their high yield and ease of storage—not how they benefit the body.

Fortunately with initiatives like the international Slow Food movement, we’ve slowly been returning to our roots over the past 25 years and are exploring the benefits of foods grown and consumed generations ago, before the industrial food revolution of the mid-20th century. This is where red fife, purple barley, black einkorn and more familiar ancient grains like spelt and Kamut take centre stage.

Red fife, in particular, traces back to a 19th century Ontario farmer, David Fife, who received a Ukrainian Halychanka wheat seed from a European visitor. That single seed adapted well to the Canadian climate, so Fife started producing the best wheat in Canada. And his wheat remained the cream of the crop until the turn of the century when new hybridizations created from red fife took over and led us to our current common wheat.
Modern wheat has been under the microscope lately, due to the explosion of gluten-free and low-carb diets. These diets definitely shed light on heavily refined grains and their deleterious effects on our health. But to the average eater wheat is wheat, right? Not quite.
Emerging research shows that the gluten structure and content in some of the heritage wheat varietals like red fife are different than that of our modern wheat. The hybridization of wheat has altered the ratio of 2 gluten-forming proteins: gliadin and glutenin. The predominant modern wheat grown in Canada has much higher proportions of gliadin, which is the part of gluten that causes most problems for people. Heritage varietals of wheat, however, have a different ratio of glutenin and gliadin and the structure of these proteins varies as well, potentially making them less problematic. So although they still contain gluten, ancient wheat varietals may be more digestible for those with gluten sensitivities and those who wish to avoid developing them.

But does that mean that ancient grains, like spelt, Kamut and red fife would be suitable for those with celiac disease?

If you have celiac disease, steer clear of all of these grains. Instead, enjoy non-gluten-containing grains like rice, teff, quinoa, buckwheat, millet, amaranth, corn and pure oats. And as for all of the gluten tolerators, variety is the spice of life. Mix in a variety of all of these grains, mostly whole, every day.
That concludes our history and nutrition lesson on ancient grains. Hopefully with your future baking and cooking, you’ll be more inclined to bring a bit of history to the kitchen by experimenting with different flours and side dishes where the star ingredients are heritage grains like red fife.

Choices’ Nutrition Operations Manager and one of the Dietitians, Nicole Fetterly isn’t much of a history buff, but she does love heritage grains. What she loves even more is sharing these farm-to-fork stories with her two little ones and connecting them with crops and foods that are rooted in health and history. Email Nicole at nutrition@choicesmarkets.com if you have any questions on heritage grains and how to incorporate them into your daily diet.