Why Farmed Sturgeon is an Ocean Wise Choice 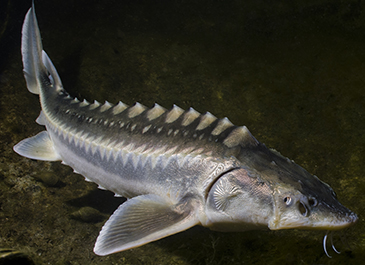 Sturgeon is the main fish family used for caviar production. All 26 wild sturgeon populations are depleted globally and some are threatened with extinction. This is due to a number of factors including the high demand for caviar, poaching, habitat degradation, and the fact that they grow very slowly and reach reproductive maturity after more than a decade. In British Columbia, wild white sturgeon are listed as endangered by the Committee on the Status of Endangered Species in Canada (COSEWIC) as well as the US Endangered Species Act.

The good news is that farmed sturgeon is a sustainable alternative to wild sturgeon. White sturgeon are the largest species of sturgeon in North America. They can live up to 100 years and grow up to 6 metres long. In British Columbia, white sturgeon are farmed at Target Marine Hatcheries in Sechelt, in land-based tanks, and can be purchased under the brand name “Northern Divine”. Males are typically harvested for meat which is almost boneless, as sturgeon are composed of mostly cartilage. Females are harvested at a later age in order to harvest the caviar.

Land-based farms are a sustainable method of aquaculture because they eliminate many of the risks associated with open systems. For example, land-based farms allow for the recirculation of water. This means that almost all the water is treated and cycled back through the farm instead of being discharged into the surrounding environment. The nature of a land-based farm allows for farmers to tightly control the environment of the sturgeon which minimizes disease outbreaks. No antibiotics or hormones are given to the sturgeon which have not experienced pathogen problems at Target Marine Hatcheries. Open systems allow for the possibility of escaped fish to the environment which is a concern especially if the fish are non-native species. Escapes can compete with native species for food, habitat, interbreed which can compromise the genetic quality of native fish, or become invasive. In contrast, land-based farms greatly minimize or eliminate the possibility of escape.

With farmed fish, a concern is sometimes the amount of wild fish used in the feed. Sturgeon consume about 1.5lbs of wild fish to produce 1lb of sturgeon product which is a moderate amount. Farming operations can also sometimes deplete wild populations by sourcing the broodstock from live capture. Target Marine Hatchery produces its own offspring which protects the wild and threatened populations.

Choosing land-raised sturgeon is an excellent way to reduce the market demand for depleted wild sturgeon. When checking for sustainability, look for the Ocean Wise symbol which is the Vancouver Aquarium’s assurance of an ocean-friendly product.

Claire’s love of the oceans grew from being raised on the island of Mauritius, in the Indian Ocean. Her passion for sustainable fisheries and marine biology has led to her involvement in several different projects which focused on everything from lionfish in the Bahamas to sockeye salmon in Rivers Inlet, BC. After completing her Master’s degree at Simon Fraser University, she joined Ocean Wise in 2013 in order to pursue her goal of ocean conservation via consumer education. Claire’s role with Ocean Wise focuses on retailer and hotel partnerships.