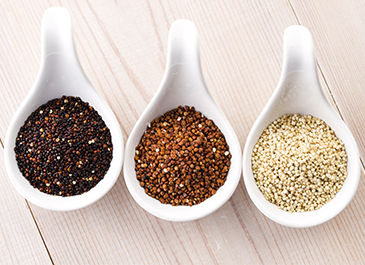 Most of us have heard many of these grains: quinoa, millet, kamut, buckwheat, amaranth, wheat berries, barley and steel-cut oats. But what exactly are their health benefits and what should we do with them?

Grains like quinoa (keen-wah), millet and buckwheat are considered ancient grains. Having been around for centuries, ancient grains are still cultivated in their original state. Their genetics have not been tampered with, nor have the plants been cross bred in the same way as conventional grains.

Since ancient grains are unprocessed, all of their original nutrients, vitamins, protein, natural fats and fibre remain intact. Being that these grains are also a complex carbohydrate, their absorption and digestion rates are slower, making them more satiating than refined grains. The steady fuel from the whole grains allows the brain to work more efficiently, balances blood sugar levels and assists with weight management.

In South America, quinoa is nicknamed “the mother grain”, for its life-giving properties. Quinoa originally comes from the high plains of the Andes Mountains but is now grown around the world. A quick-cooking, gluten-free grain, quinoa is easy to add to any meal and serves as a complete source of vegetarian protein. It has a slightly nutty flavour and can be used in soups, casseroles, puddings, as a main or side dish.

Millet, or sorghum, dates back thousands of years to China, Egypt, North Africa and India. Today millet is still a major food source in Asia and North Africa. Millet is a non-glutinous grain and is the most alkaline of the grains. It can be used with hot or cold sauces, as a side dish or added to chilli or soup. Millet is also a quick-cooking grain and when fully cooked like oats and rice, has a filmy layer that provides valuable nourishment.

Not really a true grain, buckwheat was originally from the plains of Siberia then later spread in popularity to the Orient and to Western Europe. Roasted buckwheat has a deep brown colour and strong aroma. Buckwheat itself has a strong earthy flavour that can take some people time to appreciate the taste. This grain is popular as a flour and can be used for baking. It’s also found in Japanese cuisine such as soba noodles.

There is a cornucopia of grains available for our eating pleasure; it is just a matter of stepping outside of the familiar and experimenting with something new.