The Dish on Spinach 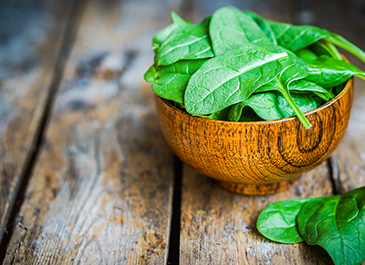 The origin of spinach reaches back to ancient Persia or what is now modern Iran. It was brought to Europe by Saracens. The Spanish took it from there and introduced this leafy green to the rest of the continent and later North, South and Central Americas.

This well-known green is a rich source of vitamins A, C and K and contains oodles of other phytonutrients and antioxidants. Although you can eat spinach raw, experts may suggest boiling or steaming it to break down oxalic acid, which could potentially inhibit absorption of other nutrients if consumed in large amounts.

If you’re not buying pre-washed spinach, make sure to clean each bunch thoroughly. And remember that fresh isn’t always necessary. Frozen spinach is a good option to use for your cooking year round.

When it comes to raw applications, salad is an excellent and very common use for raw spinach. Personally, though, I much prefer cooking spinach in some way. I find there are much more interesting things that a home cook can make using this hearty green.

Traditionally, the word florentine is often associated with spinach dishes. Think chicken, eggs, or mushroom Florentine—these main attractions all feature spinach as part of the supporting cast. But that’s just the beginning of what you can do with spinach.

Mix spinach into vegetable soups for nutrition and fibre, sauté spinach on its own or incorporate it into a wholesome frittata, dumpling or ravioli. Cook spinach with bacon or smoked tofu for a delicious dish. Use it as part of an impressive mille feuille and serve with a decadent béchamel or ricotta sauce. Of course, there’s always a risotto. Add spinach to that along with your favourite sharp cheese. Spinach is also used for dal, fritters, savoury loaves and, of course, Japanese gomae.

Aside from the winter ski season, this is the time of year Antonio looks forward to most. It’s the time of year when grocery stores and farmers’ markets are bursting with locally grown goods that can be used in his new recipes.