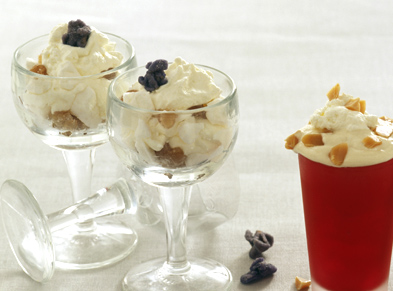 A creamy culinary confection, Chestnut Chantilly is a perfect choice for Christmas. Chantilly is a French term that refers to a dessert topping of lightly sweetened whipped cream and flavouring. When paired with an ice wine or a warm chocolate sauce, this recipe is sure to be a holiday favourite! Cheers!

1. In a heavy bottomed small saucepan on low heat, combine red wine and sucanat. Stir until crystals have completely melted.
2. Add whole chestnuts. Bring to a boil and then simmer until liquid has reduced to a thick consistency, approximately 15 to 20 minutes. Cool.
3. Using an electric mixer, whip 200ml of the whipping cream to stiff peaks; remove from mixing bowl and set aside in fridge in a larger bowl.
4. In the mixing bowl (no need to wash) put two egg yolks, vanilla (beans scraped from pod or vanilla extract), and Whiskey. Beat with electric mixer for 4 or 5 minutes until mixture lightens in color.
5. Add mascarpone and whip for one more minute. Remove mascarpone mixture from mixing bowl and pour into bowl with whipping cream, without stirring.
6. In the mixing bowl, whip the chestnut puree’ and the remaining 50 ml of whipping cream until uniform. At this point gently fold together with all other previously whipped ingredients in the large bowl. Divide in 6 cups and refrigerate. Serve topped with the glazed chestnuts and their syrup. Ultimate paired with Vin Brule’!